These days, phones age like milk. Even though the lifecycle of smartphones might finally be improving, it’s still estimated that people buy a new phone every two or three years.

There’s plenty of ways to revive an old smartphone, and one of the smartest is to use an old phone as a security camera.

With a growing number of security camera apps, it can be hard to know where to start when it comes to choosing the best app.

With that in mind, check out our list of the Top 5 security camera apps for iOS and Android for 2022.

With more than fifty million downloads, AlfredCamera is by far the most popular security camera app worldwide. It’s inspired by the idea that security should be accessible to everyone.

If 24/7 live streaming that can be monitored anywhere and instant push notifications sound like ideal features of a security system, that’s because they are. AlfredCamera puts them into a free app.

With the built-in low-light filter, monitoring pets and sleeping babies has never been easier, while Alfred’s siren feature may be useful in deterring intruders.

Unlike other security apps, Alfred emphasizes user privacy and data protection with the dedicated App Lock function and succinct device management. Users maintain complete control over every device linked to the user account.

Recommended reading:
Can An iPhone Be Hacked? Investigating IOS Security
How To Protect Your Security Camera From Hackers

While all the above features are free to use, Alfred Premium also boasts more advanced technologies that allow Alfred to be better tailored to the user’s needs. For just $5.99 a month/$29.99 a year, users can enjoy:

· HD viewing for better performance of recording.
· Zoom feature to focus on the things of interest.
· Extended cloud storage that enables you to save events for up to 14 days.
· Longer clips of motion detection videos.
· No ads

What users are saying…

I use 6 of my old smartphones to keep an eye on my home. One for my disabled wife, one for our exotic birds, one in a window to watch our cars, one in the kitchen to monitor the back door, one in the french doors to monitor our patio and one in the bathroom(it doesn’t see the entire room mostly the ceiling) my wife uses in case she needs help. I’ve used Alfred for over six years. It has worked very well for my needs.

The absolute easiest security app ever to set up super simple super easy. When you’re a single mom it doesn’t get any better than that. Had an old phone laying around downloaded the app on both and Bam 👊 that’s it literally that’s it. I can make sure my house is okay as well as my kids are safe.

Building a loyal user-base over the last decade, AtHome Camera combines traditional motion sensing with advanced AI deep learning technology. This helps it to be less prone to false alarms, and only sends push notifications when necessary.

Parents and parents-to-be will adore this app, which sets itself apart by emphasizing features designed specifically with baby monitoring in mind. Set up an old smart device in the baby’s room and rest assured with 24/7 virtual monitoring.

Keep an eye on babies using a PC or any other smart device by linking it to the assigned recording device. Through the linked device, users can chat with babies and comfort them should they become distressed.

This is particularly handy if working from another room—relax them by choosing lullabies to play for them, before activating the flash when it’s time to wake up.

Of course, all of the apps on the list, including AlfredCamera, are also more than apt for use as baby monitors since they can perform identical functions.

SeeCiTV claims to make old phones into free security cameras. The big selling point here is bi-directional streaming. In other words, it makes use of both front and back cameras as security cameras. Users can rely on Google Drive for storage.

Unlike many other similar apps, SeeCiTV doesn’t require that the phone is unlocked to record, making it more conspicuous. Pre-set times can be allocated for when to connect the camera. This way, it’s less likely to cause heat issues, and it saves on battery life by avoiding unnecessary usage. 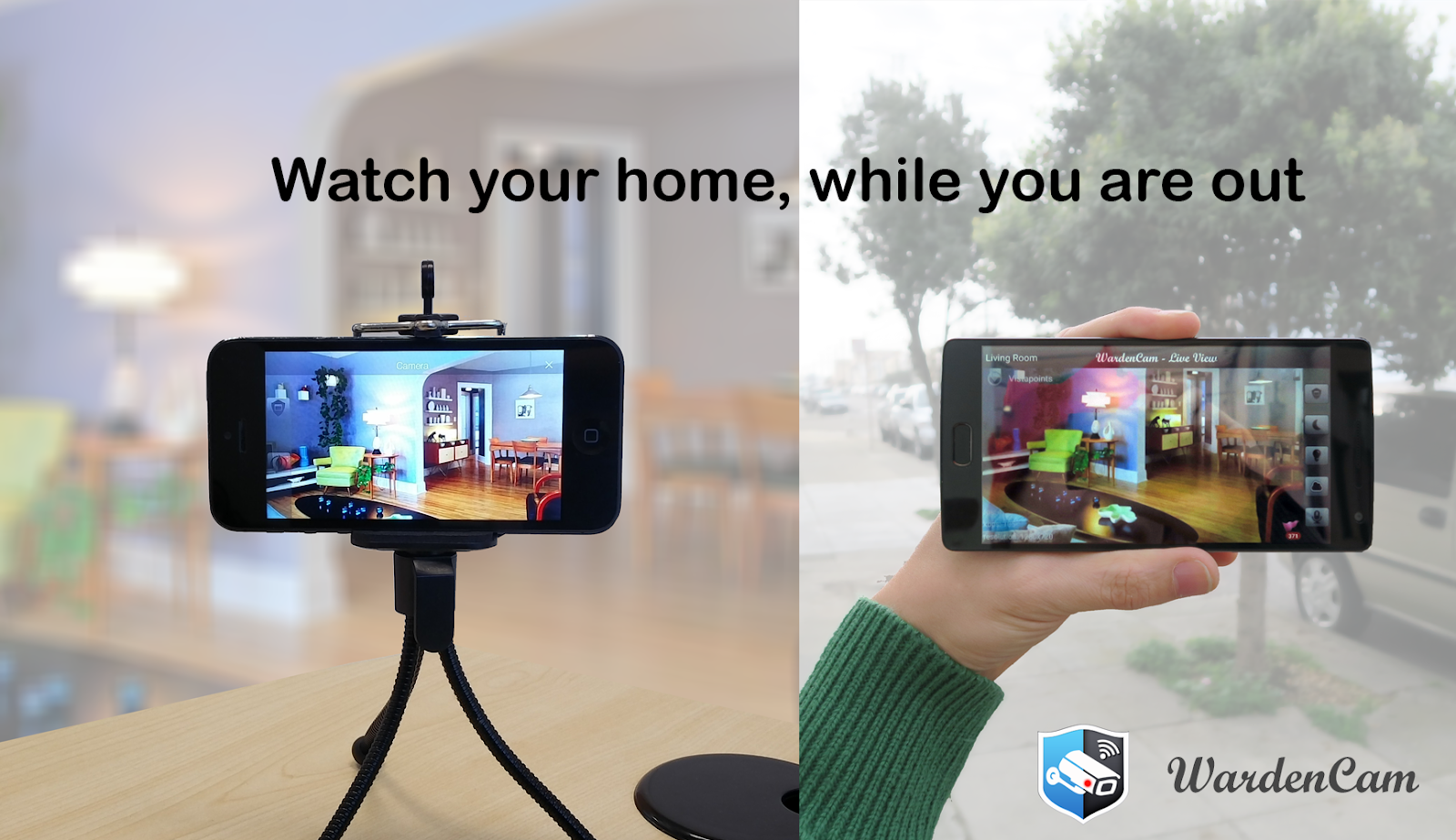 It’s prone to crashing, but when it works, it works well. Though frame rate will be inconsistent, the maximum 1080p HD setting is good quality (assuming the device it’s being used on also boasts a good camera).

AlfredCamera sets itself apart as a robust, all-in-one security solution with a simple and easy-to-use interface.

Don’t just take it from us—over 50 million downloads make it by far the most popular security camera app available. Here’s how it works in three simple steps.

You’ll need two phones to get started! One phone will act as a ‘Camera’ device just like any security camera that monitors the surroundings, while the other phone will be a ‘Viewer’ device which enables you to watch the livestream and receive push notifications if any unusual movement is detected.

Pair it to another device with the app installed which will be used as the camera, or to AlfredCam, the dedicated hardware camera, by tapping ‘Add a Camera’. Don’t actually have an old phone lying around? Tablets and PCs can be used just as easily.

A QR code will appear on the viewing device, which needs to be held up to the camera device to be scanned. It’s then automatically paired, and Alfred’s ready to serve. Setup is complete in just a couple of minutes.

Mounting the camera can be done in any number of ways depending on the device being used. The most important consideration is to have the camera in a place where it is able to be charged constantly, especially if the camera intends to be run 24/7.

Lacking inspiration about how to best place a device? Find out more about how best to position Alfred paired devices.

How can I use CCTV on mobile without internet?

Mobile CCTV can be used without the internet by using physical storage rather than cloud-based storage. Not all devices or apps will require an internet connection at all times to use.

However, recording 24/7 will consume a lot of storage space very fast. Android devices usually allow for expandable storage via microSD, which would be necessary to facilitate larger file sizes being stored.

Can you tell if your phone is being monitored?

Users might also notice unexpected changes in the mic and speaker. Otherwise, odd files deep in your phone’s storage and unusual ambient noise when speaking to someone in a call are other tell-tale signs.

Can a cell phone be hacked without the internet?

Yes, a cell phone can be hacked without it being connected to the internet. Even with Wi-Fi off, a phone still emits various wireless signals which can make it vulnerable. Pick up some tips on protecting devices from hacking.

Is there a security camera that works without Wi-Fi?

Some brands have produced security cameras that don’t require Wi-Fi to function, like Arlo’s  ‘Go’ and Reolink’s similarly-named ‘Go’. Wi-Fi-free IP cameras usually use mobile data instead, meaning users need to buy a mobile LTE plan to store footage on the cloud. Otherwise, it can be saved to a microSD card.

While as a society we continue to plow through mobile devices at an alarming rate, there are increasingly inventive ways to find uses for them before they end up in landfill.

By turning an old phone into a security camera, it’s possible to create a conspicuous, highly functional alternative to much more expensive systems.